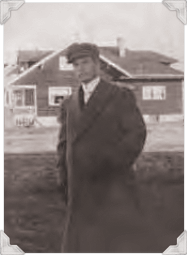 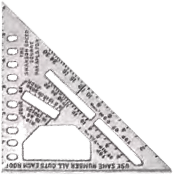 SWANSON FROM THE BEGINNING
The Swanson Speed® Square and the “One Number”sm method of determining the angular pitch of a roof were first developed in 1925 by a carpenter name Albert J. Swanson. As his fellow tradesmen began to appreciate the ingenuity of his idea, they wanted their own Speed® Square. Swanson began to hand make the squares to fill the requests for the tool. Demand for the work saving tool continued to grow and in 1930 the Swanson Speed® Square was first sold in interstate commerce. By 1945 Swanson started Swanson® Tool Company, Inc. to manufacture and sell the Speed® Square through recognized channels of distribution. His son, Ronald C. Swanson assumed control of the company in 1971 and added other quality tools to the line.
Today, Swanson® Tool Company continues to proudly manufacture and distribute the Swanson Speed® Square and other fine carpentry tools from its headquarters in Frankfort, Illinois. Under the direction of the Allemand Family the Swanson® product line has been upgraded and expanded to meet the changing needs of its contractors and do-it-yourself enthusiasts.

QUALITY YOU ASK FOR BY NAME®
A hammer, a screwdriver, a saw…how many tools are requested by name? The Swanson Speed® Square is one of the few tools whose name is known by contractors and do-it-yourself enthusiasts worldwide! We believe the exacting quality and accuracy of our product has kept the Swanson® name on the minds of our customers for more than 90 years. Some of the recent upgrades included in the Speed® Square are finer gradations for better accuracy, black-filled gradations for easier reading, matte finish to prevent glare and most recently the Diamond® cut out. This feature makes layout work and seat cuts on common rafters easy and is one of the exclusive Trade Marks of the Swanson® Tool Company. From the original Speed® Square to the complete selection of Swanson® tools our products are the definitive measure of quality and craftsmanship. Ask for them by name!